Posted on March 11, 2016 by purplepersuasion

I was tempted to call this post “home”, but I’m not, I haven’t even set off yet. I’ve been seen by two nurses from Home Treatment Team (one of whom I know quite well) and officially taken off the hospital’s books and on to HTT’s, but as yet I am waiting for my TTOs (drugs to take away). All these bloody abbreviations! Once Tom gets here HTT want to speak to him as well, so who know how long that will take.

So I feel like I’m in a kind of limbo. I’ve been given all the things from my box in the nurses’ room – things I hadn’t been trusted with for so long I had almost forgotten they existed, such as dressing gown belts and my own purse and the diazepam a nurse took from a long ago cache in my handbag. I’ve stripped the bed except for one sheet as I don’t want to sit on the nasty wipe-clean plastic while I type this. I’ve taken down my Wall of Awesomeness where I Blu Tacked every card and photo I was sent along with every colouring picture I completed. I couldn’t begin to count the things people sent into me. Most senders are people I know from Twitter but have never met in real life, responding with the knowledge of their own inpatient stays, which certainly gave the nurses something to think about. I received poetry books, novels, cuddly toys, chocolate and other food, body lotion, shower creme, socks, lip balm, foot cream, mittens, multiple colouring books… The list goes on.

Between this and the stuff I asked Tom to bring in, along with a rather hypomanic Amazon spending spree, I’m probably leaving with more than twice as many things as I arrived with. I’m typing this on a Bluetooth wireless keyboard while looking at my phone which is in the clutches of a holder clipped to my bedside table, Amazon purchases in conjunction with the DVD box sets and craft materials I bought for the ward and much-needed silicone putty earplugs. I’ve asked Tom to bring the big holdalls and have given various things (including the Prison Break box set!) to various friends. 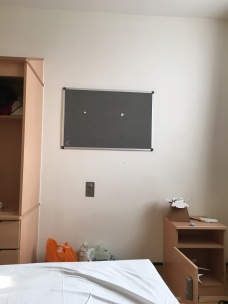 How did I come to this point after almost five weeks as an inpatient? There were a few things that made be begin to feel I should consider discharge. A biggie was sleep. The idea had been for me to spend this week and the next monitoring how I tolerated the first 100mg decrease of quetiapine (from an admission dose of 700mg) and in particular how this was affecting my sleep. Given that last time I forgot to take my Q I was up for 37 hours straight without feeling remotely tired, this was my main concern and it was agreed that I should try sleep aids such a promethazine (an antihistamine) under the controlled conditions of the ward. But then the conditions span out of control and there was nothing pseudo scientific about them at all. Living next to a woman who repeated the same four bars of a religious chant for hours, only to be replaced by a woman who screamed during the night in such an aggressive way I was afraid to come out of my room, on a corridor where a sleepless woman walked up and down talking on her phone and staff had private chats, I have no idea at all what my sleep pattern is like and whether taking different meds at different times has had any effect at all. All the disrupted sleep has also meant that I have often fallen asleep again in the mornings, missing my favourite ward activities.

Then there is the way I have begun to respond to other patients. After years in the helping professions I’ve found myself almost slipping into counselling mode with ward friends, whilst having less and less tolerance for other patients’ drama. The last few days have seen a LOT of drama, even for a triage ward – people throwing things and trying to kick the door open, staff and patients being verbally abused, sudden unexpected ward moves and escape attempts and self-discharges, manic people wearing everyone else out (yes, I know I am in no position to judge, but whatever). It’s all very tiring and the more well I become, the less I can empathise on the grounds that “we’re all poorly”.

The biggest thing I felt I had to do was to use public transport again, eventually building up to going back to That Station. So I was allowed my Freedom Pass again and did bus journeys with Tom and later a staff member, then the following weekend a short tube trip with Tom. On Wednesday two members offered to escort me to the station. The nurse who came along was very sensitive, asking me beforehand what I would like from her. Did I want her to walk ahead of me? Would it be more helpful for her to walk behind, just observing, or would I even like her to physically hold my hand? We settled on just talking on the tube and then seeing how I was doing as we neared our destination. I wasn’t sure what to expect. I thought I might feel anxious, have a panic attack even, that maybe suicidal thoughts would once again intrude – or that being so very close to home yet not being able to go there and stay there might make me very upset (I have refused the offer of home leave on these grouds).

What did I feel? None of the above. What I felt was sudden understanding of just how very unwell I had been passing through that station so often on the way to HTT or yoga in the week before my admission, how full my head had been of suicide planning and how I was constantly squeezing in one or two more ideas about the time that the fast trains passed through or about what I could take with the pills to make the overdose more effective. My God, I was ill. I genuinely don’t know what would have happened to me if I hadn’t come into hospital when I did.

During my near 5 week stay I have gone through so many feelings about the ward. Initially there was a sense of lightness and relief at no longer having to take care of myself. Next came frustration with the pace of ward life, followed more by frustration and a hefty dose of resentment at feeling that informal admission just amounted to not having been sectioned – yet. I formed such strong bonds with fellow patients and grieved when they were moved onto longer stay wards, yet celebrated other people’s discharges as they left for home with a spring in their step. I have learned to appreciate staff I wrote off when I first arrived and I am crying now at the thought of the level of kindness I have been shown, and the reflections staff have offered me in terms of how far I have come since I was first admitted.

I feel that the experience is kind of etched into my brain. Sometimes it’s been too much and I have done a lot of stuff alone in my room; coloured pictures, written, journalled, read poems and novels, practiced yoga, worked out, Skyped friends, chatted to my parents and other friends and relatives, taken a million lovely hot showers… A number of staff commented on how homely my room looked with all the cards and presents on display, and that was really important to me. If I had to be here, I wanted my surroundings to feel friendly.

So I’m going. The ward manager just came in to say goodbye, collect what I think/hope was constructive feedback on what could be improved, and give me hug and say what a lovely patient I’d been. Since I started writing this the TTOs have arrived; Tom is on his way, and after he’s spoken to the HTT nurse… that’s it. More goodbyes to patients and staff and no doubt more tears, and then home. I am expecting it to feel weird; I always feel a bit dissociated when I come back from holiday, and this has been a looooonnng holiday. I’m particularly looking forward to being reunited with my bathroom (an actual bath! Actual razors to shave my actual legs! An actual door you can close when you have a wee that no one can unlock from the outside!) and my bed. Heated under blanket, memory foam mattress, Egyptian cotton linen and a duvet. No more static crackle sheets or lumpy plastic-encased pillows.

Overall, this admission was 100% the right thing to have done. But now it’s time to start thinking about the future. The stay has given me time to think about my life, about my passions and my dreams and what kind of a life I can build from now, even within the limits of my condition. There’s a lot I want to do.

Time to move on.