Charlotte is available to speak on television and radio, whether live or prerecorded, as well as providing quotes for print and online media on topics related to mental health.

Her media and writing credits include:

January 2021 What do people with bipolar really pay attention to when they are monitoring their mood? The Mental Elf

July 2019 “Wrestling some power back for the women”: My experiences researching medication decision-making in pregnancy

17/06/2019 It’s too late for Theresa May to solve the mental health crisis among young people – here’s why The Independent https://www.independent.co.uk/voices/theresa-may-mental-health-young-people-camhs-a8962406.html

September 2015 Beyond Boundaries – The Lancet Psychiatry

13/04/2015 Extensively quoted in a BBC Ouch! story on mental health images in the media

16/02/2015 Guest blogger for Mumsnet on the need to improve mental health support for teachers and pupils in schools. 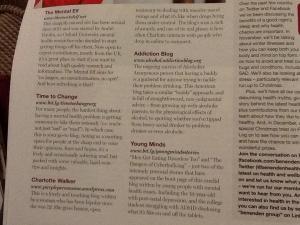 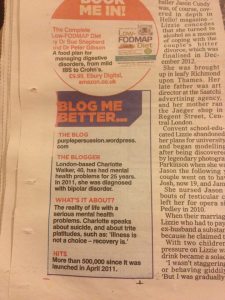 Autumn/Winter 2013 edition of One in Four Magazine (published May 2014): The Drugs do Work.

20/02/2014 Expert panel member at London Medfest, the medical film festival, alongside Dr Raj Persaud, Dr Kier Shiels (who appeared on Your Life in Their Hands) and Dr Kamran Ahmed, consultant psychiatrist and filmmaker.

11/02/2014 Contributor to a series of blogs in which “leading figures in the mental health world what it would take to improve things for people with serious mental illness” commissioned to mark the departure of Paul Jenkins as CEO of Rethink Mental Illness.

25/09/2013 Guest post, The Silver Lining on the Bipolar Cloud, on bipolar, writing and memoir published by Women Writers

Summer 2013 Beamed across the nation in One in Four Magazine

06/06/2013 Interviewed live in the Sky News newsroom, giving a bipolar perspective on the news of Stephen Fry’s suicide attempt

09/04/2013 Interviewed for Converge, a podcast about activism and discrimination, on mental health stigma

08/02/2013 Interviewed about the blog for the Ealing Gazette